Say, your own a small team of capable programmers, and you need to build an an mobile app across two platforms (iOS and Android), what would be your best bet?

Currently, there are a lot of different ways to do that, and that’s exactly the biggest problem to many people. If we have no other choices, then we would simply build one iOS app and build one android app, without thinking too much. Unfortunately, that’s not the case today. We have a lot of different choices now, in fact, we have too many choices.

According to the most popular way of classification, there are 3 main approaches when building the mobile app:

Here we make a more detailed classification for those approaches nowadays, in the increasing order of ‘nativeness’: 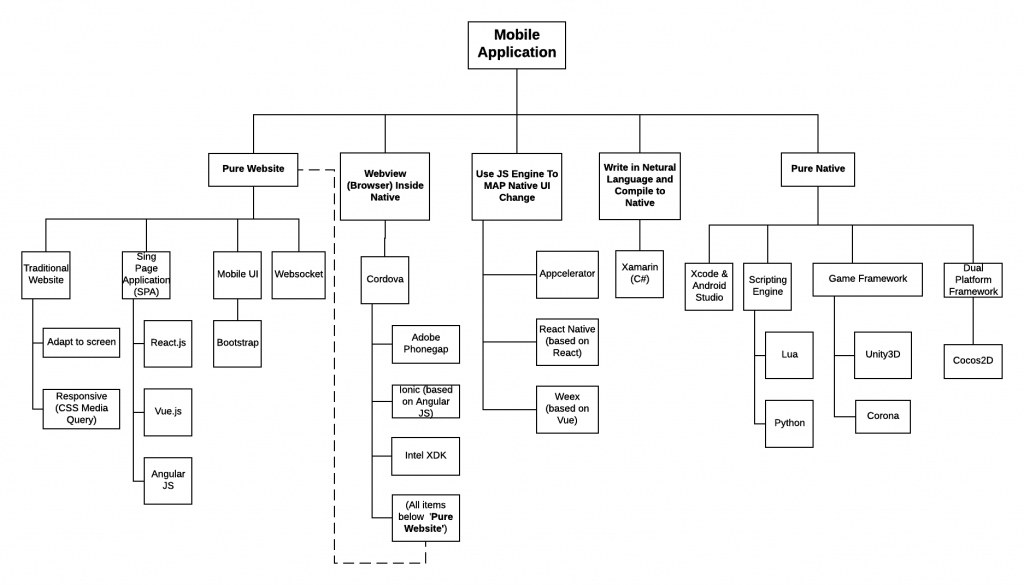 Under each category, there are actually a bunch of technologies that could be used with, this diagram briefly illustrate the general picture. (It does not include ALL available technologies since there are too many of them, I just list out the most popular ones). 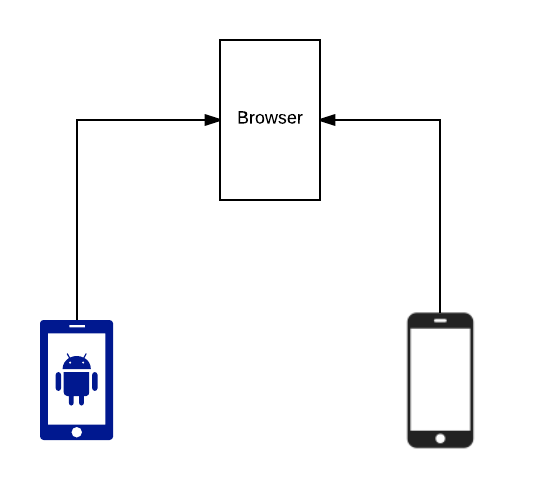 When using this technology, you basically build a regular website, using HTML + CSS + JS + backend language (Java, .NET, PHP, Python, Node.js or whatever). The user needs to be open a browser in order to view your content. While it’s (very) unlikely to ask the user to type a long address in the mobile browser, you could provide some links in the email or ask the user to scan a QR code to access the URL.

People may put the website as a homepage icon in the device, if they want. But not many people would actually do that, unless your site is exceptionally attractive or they have no choices (e.g. required by the company policy).

There are a number of ways to make the web site look better in the mobile device, however.

It’s still a website actually, however it uses some new technologies and frameworks, which are complicated enough to have it separated from the traditional website. The biggest difference is that, the web page will not be refreshed during the entire navigation. The website URL basically would not change except the hashtag (#) part.

One famous example of SPA is the Gmail, whenever you click links in the page, the page is not reloaded, you are just fetched with the new content.

There are a number of SPA frameworks outside, here are the most famous ones:

This article won’t go into much details about the framework comparison, but my gut feeling is Vue.js might be a good one to stick with simply because the syntax of this framework looks more explicit and simpler (Zen of python #2 & #3). There are a lot of related comparison articles in Google.

Strictly speaking, this is not another approach, it’s just another technique you could add on. There are some mobile UI frameworks outside that could make your website looks more like mobile devices. The buttons, rows and combo boxes would look more **like **native devices.

It’s a pure cosmetic thing, and it could be used along with either traditional website or SPA. Bootstrap is one of the most famous UI framework, and it’s supported by Twitter.

Again, this is not a framework, it’s just another tool you could use and leverage. Websocket means you could continuously update your website without keep sending backend requests. For example, you want to set up a page that would show the stock prices in real time, if using traditional way, you may need to send ajax request to backend at a regular time interval. With websocket, you could pull the data from the website continuously using one long lived connection, and the data will be kept updated. You may find the actual demo here. 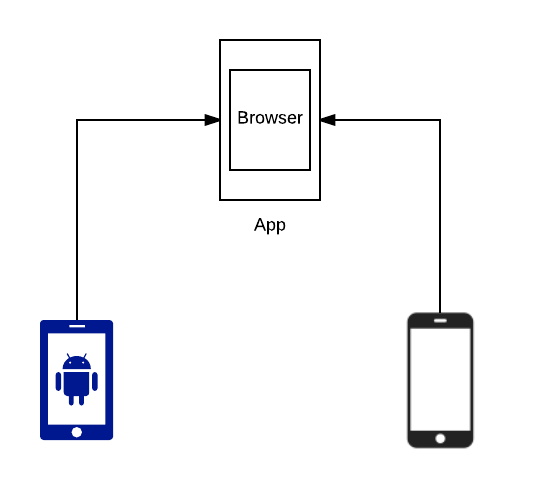 This technology means you are still writing a website using HTML + JS + CSS. However, the website is wrapped into the skeleton of an app. It looks like an app from outside, so your app would still be uploaded to app store and appear as an app icon in the device. When the app is opened, actually it would open an internal browser, and your content will be displayed from that browser.

Since it still uses HTML technology, **it means you could basically use all the techniques of the previous section. **For example, you could show a SPA site inside the internal browser. Here you are going to see how the various technologies are interlinked together.

Cordova is an Apache foundation project started from 2011, which aims to provide a framework for this hybrid approach. In addition to providing a simple skeleton for the website, it also provides some useful utilities:

Cordova is actually the foundation of a big eco-system, and people tend to build frameworks upon it: 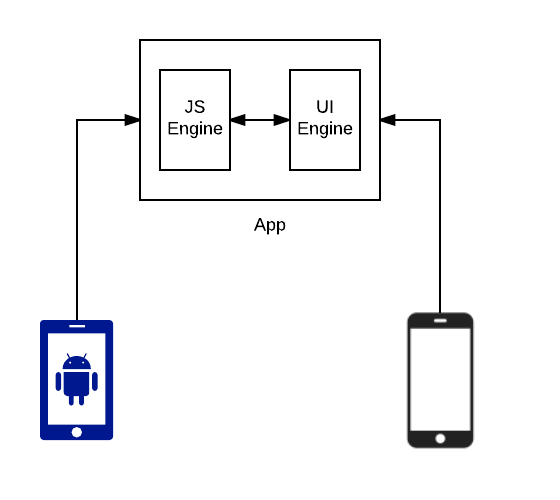 This is another interesting hybrid model, that means you still uses HTML + JS to write the application. However, for those technologies in this category, they did not embed a web browser inside.

The engines rendered the native UI based on the realtime Javascript object states. That means, when the app is started, the JS scripts are executed, and another set of native UI widgets are created and rendered based on the status of realtime JS objects. The JS objects are never actually displayed in the webpage.

This is actually quite similar to what happened during SPA page rendering, so without much surprise, many of them are related with some SPA technologies. 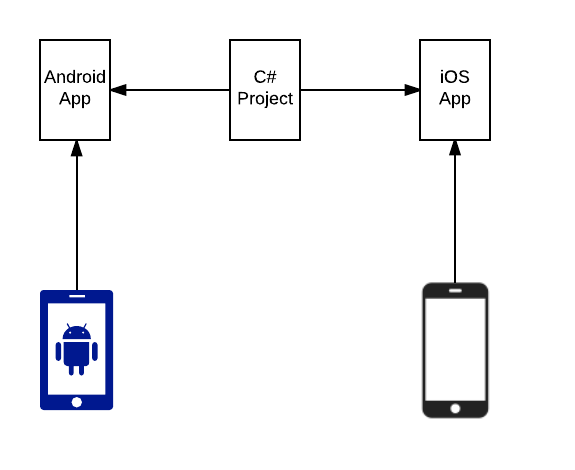 This is probably the most bizarre approach among the 5 technologies. The user is required to write a mobile app in a neutral language (non-objective C and non-java), and the project would then be compiled to a native of app of iOS and a native app of Android.

When the final built app is executed, it just run as a normal app, it does not require any JS engine or webview. It just run like a native one.

It’s extremely hard to accomplish the trick, and hence very few companies provide this technology. Currently Xamarin is the most famous (and probably the only one) company that provides this service. Users only need to write C# for the mobile app development of both iOS and Android. The magic seems to happen in the low level API, where the linkage from .NET to iOS/Java library happens. 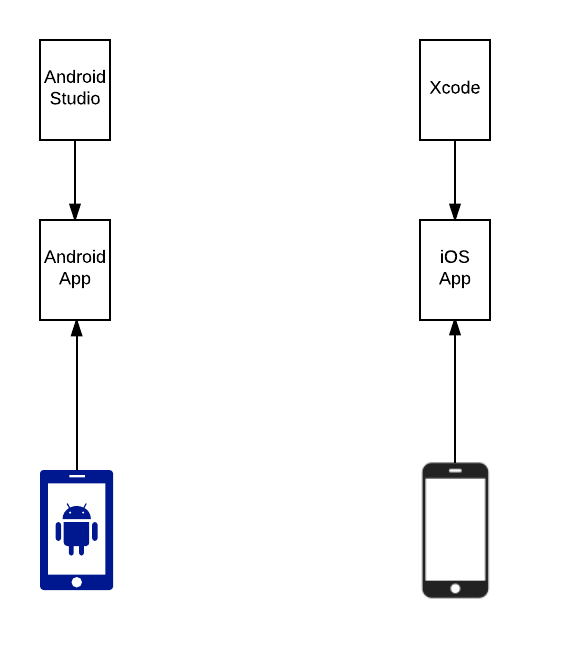 This is the most old fashioned approach to write apps. But in many cases, if your applications are enough complicated, this is actually the most safe way.

You just write an iOS app using xcode, and write an Android app using Android studio. In my own experience, once you have finished the iOS app, writing a counterpart in Android is not that difficult (and vice versa). In most cases you could re-use architecture, design patterns and backend API.

There are some other tools to help reduce your duplicate work, even if you are trying to develop in the native way:

In summary, pure website is easiest to implement but with biggest limitation. Pure native is most flexible, but with big cost of maintenance. However, both approaches gives a more reliable schedule during project management, you are less likely to get stuck for weeks for a mysterious and program unrelated bug.

The other three technologies: webview hybrid, JS engine hybrid and cross-language linkage are all tricky approaches. You could be very happy at first, and totally painful at the end. Or you could be happy all along the way, depend on the complexity of the apps and the **luck **of your team.

So, let back to the first question, if you need to select a technology to develop a mobile app, what would be your best bet? That really depends on a number of factors, like app complexity, app schedule and available budget. However, I believe the following two factors are the most important among all:

Finally, here is the table that shows the pros and cons of all the discussed technologies: